In this blog, we studied the employability of engineering graduates in India and found a varying degree of employability across states.

Aspiring Minds study is based on AMCAT – India’s Largest Employability Test results of over 120,000 Engineers across the country. AMCAT being the leading measure of employability is able to accurately predict the employability of Engineers in various technical roles including IT services, IT Products, KPOs, BPOs, technical support, etc.

The study shows the drop in percentage of employability of engineers across different states for different sectors in India. Aspiring Minds Research cell has done advanced statistical studies to uncover the core reasons for the dramatic variation in the quality of talent being produced. 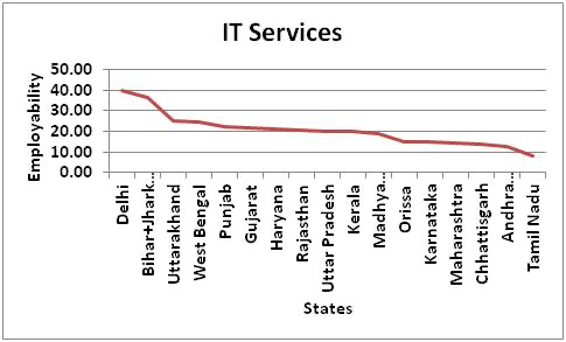 Figure 1: Employability in IT Services across States & UTs. * Certain states with low sample size left out of study.

It is observed that employability in IT services companies is highest in North, followed by East, then West and then South. Delhi and Bihar-Jharkhand emerge as states with the largest percent employability. Delhi with its select colleges has emerged as an education hub with high standards of education and attracting the best minds from across the country (see Figure 1).

In India, there is a concentration of engineering colleges in a few states. The report looked at the ranking of states considered as ‘engineering hubs’ by employability in the IT Services sector. It is observed that states with more Government colleges as compared to Private colleges fare better on employability.

Variations in employability across states: exploring the reasons

Aspiring Minds Research Cell looked into establishing the factors which could explain the dramatics variations in Employability across states. They considered the impact of the state population, size of the state, number of colleges, gender spread, etc. as a possible explanation for the same.

Hypothesis: Impact of number of colleges on quality of education 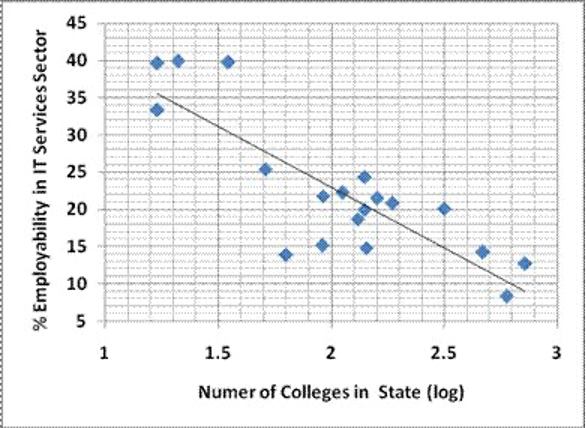 Figure 2: Percent employability correlated to the number of engineering colleges in each state

Secondly, even though the number of colleges is a major factor in guiding employability in a particular state, it does not explain it completely. For instance, even though Tamil Nadu has a lower number of engineering colleges (~600) as compared to Andhra Pradesh (~750), it has a lower employability percentage (8.33 as compared to 12.73). Similarly, Delhi has more colleges than Bihar, but higher employability. In a nutshell, Tamil Nadu, Andhra Pradesh lag behind in the average quality of talent while in metros, Delhi again has the best engineers followed by Kolkata and Bangalore.

Employability for a state is a complex interplay due to several socio-economic and developmental factors. What is required is a greater thrust on improving the quality of engineering education.

Figure 3: Employability in IT Product Companies across States & UTs

With respect to IT product companies (See Figure 11), it may be noted that the trends are different. Whereas IT services’ employability is mainly a function of English and cognitive skills, the skills in computer programming and algorithms also become necessary for IT Product companies. Because of this, the education in college has an equal, if not more impact on IT product employability as compared to the impact of the quality of students when they join the college. This is also evident with the fact that the correlation to the log of the number of students falls to -0.72 from -0.83 in the case of IT services companies. The number of colleges is a suitable proxy for intake quality. 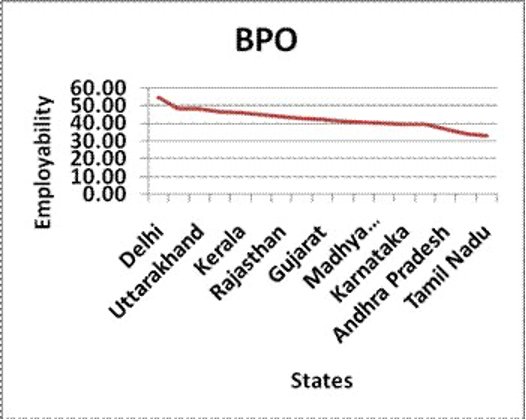 We compared employability across colleges within major metros in the country (see Figure 8). We found similar trends to those with regard to employability in states. Delhi (north) shows the highest employability percent followed by Kolkata (East), cities in the West, and the lowest employability figures were observed in colleges in Southern cities.

The skew in employability is quite high, for instance, the IT product employability in Delhi is as high as 1 in every 9 candidates and as low as 1 in every 200 in Chennai. Even though Bengaluru has similar IT Services’ employability as compared to other Southern and Western cities, it shows much higher employability for IT product companies. This indicates that candidates in Bengaluru do much better at computer programming and algorithms even though they show similar English and cognitive skills. This could be better exposure to computer programming either at home, school, or college.

The reason for this skew in employability is explained again by the trend in the number of colleges in each of these cities (See Table 2). The proliferation of engineering colleges in South India and the West has brought down the employability figures. There are way lesser engineering colleges both in Delhi and Kolkata. This is in spite of the fact that the population of Delhi is much more than Southern cities and comparable to that of Mumbai.

Table 2: No. of Colleges in Metro Cities

In this second edition of National Employability Study by Aspiring Minds, this excerpt probes into the employability by states. The study is based on AMCAT scores of more than 120,000 technical graduates engineering and MCA students (in final year) across the country.

AMCAT – India’s largest Employability test was conducted in more than 20 states under proctored environment. AMCAT covers all objective parameters for adjudging employability in the IT/ITeS sector including English Communication, Quantitative skills, problem-solving skills, and Computer Science and Programming skills. Employability figures are based on actual hiring benchmarks on AMCAT scores set by multiple companies in IT/ITeS related sectors. Since the study is based on a standardized aptitude and skill test, not only does it find the employability quotient, but also helps investigate skills that are deficient in a particular group of candidates with regard to different sectors.

Software Engineering Graduates in India: How Does Job Performance Stack up by State?

Sales Transformation: The Role of HR in Building an Intuitive Sales Organization

Insights by Andy: Why 2022 Needs to be People-Centric